The Urban-rural relationships in Europe

“‘Relation mapping ‘ is an excercise to help you understand the relations cities and their surrounding landscapes have through making them visual. By focussing on just one issue you can create a better insight in that particular issue . Although things always interact…this will keep your assignment within proportion. You can work together with other EMiLA students in the same school in order to get a wider view on different issues. By comparing the outcome on your issue with other students on other cities you can learn from each other, exchange information…and above all get a grip on different situations in different nations. Use GIS (arc info) information. Your intervention proposal can be a change for a specific area…but it could also be a proposal for an overall change on a certain function. The result must be a map , or a series of maps, that show the change. ”

To stop or continue slideshows, please click on the image.

The spatial shortcut between urban and rural 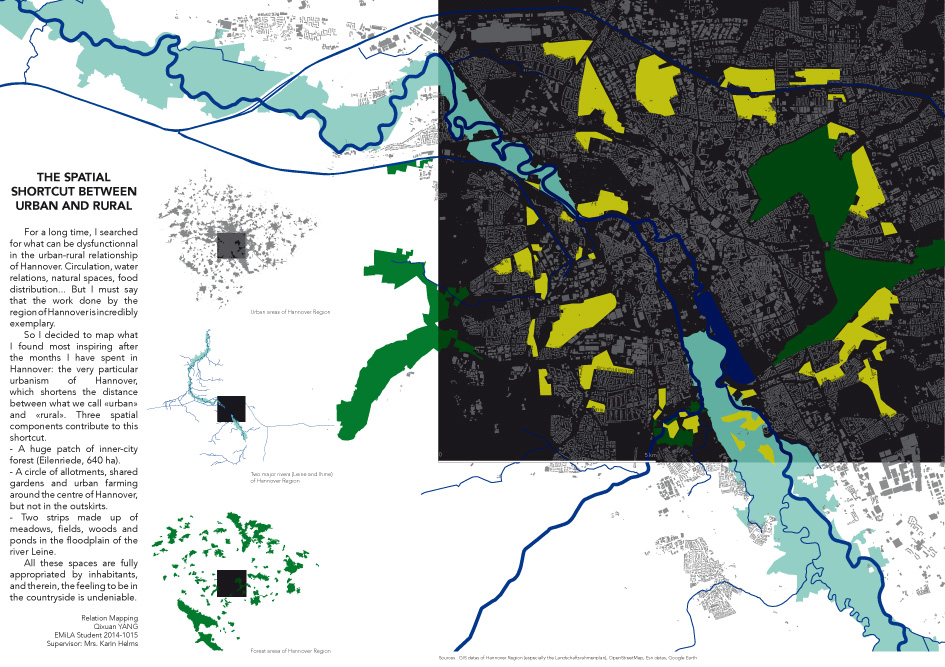 “For a long time, I searched for what can be dysfunctionnal in the urban-rural relationship of Hannover. Circulation, water relations, natural spaces, food distribution… But I must say that the work done by the region of Hannover is incredibly exemplary. So I decided to map what I found most inspiring after the months I have spent in Hannover: the very particular urbanism of Hannover, which shortens the distance between what we call «urban» and «rural». Three spatial components contribute to this shortcut.
– A huge patch of inner-city forest (Eilenriede, 640 ha).
– A circle of allotments, shared gardens and urban farming around the centre of Hannover but not in the outskirts.
– Two strips made up of meadows, fields, woods and ponds in the floodplain of the river Leine.
All these spaces are fully appropriated by inhabitants, and therein, the feeling to be in the countryside is undeniable.”

The urban-rural relationships in Europe:
Marseille-Edinburgh

“Le crould is a river that springs north of Paris, near the city Mareil-en-France. It meets La Seine at the mouth of the Canal Saint-Denis. It starts on the countryside, in the agricultural part north of Paris in the Plaine de France. On its way to Paris it passes different landscapes and forms of urbanisation, describing a journey from the rural the to urban. Long stretches of the river were canalized and disappeared under new residential areas. The result is that it is only in some areas visible and that it lost its continuity in the landscape. In areas where it still is above ground it lost the space it formerly head to spread.

Carte de Cassini, 18th century
On this historical map from the mid 18th century the Crould still has a very natural course, taking a lot of space with several parallel streams. First centers of urban development are visible.

Today
Today long stretches of the river flow underneath the surface (dotted line) and some of the streams disappeared completely.

Overlay
In orange the rivers according to the map of the 18th century and in blue the current situation. This overlay is not completely exact, considering the limited precision of 18th century mapping compared to contemporary technique. Nevertheless it is visible, where streams disappeared or lost their dynamic shape.

Potential
Several parks and open spaces are situated along the course of the Crould, where it would be possible to give some space back to the river and make it again more present in the landscape.”