ENSP Workshops
Each semester at ENSP Versailles starts with a workshop on the semester’s main theme. In September of the M1 level this is on Landscape Urbanism, the workshop is taught by the guest teachers that bring students to Versailles.

Workshop issue
To the west of Rouen, the two river banks are industrial wastelands. The question posed to students was what type of landscape could be designed at this place to create a new attractive quarter for residential and economic activities. Beginning with landscape planning, the students worked on landscape urbanism for this site and during the workshop they answered the questions regarding a possible residential settlement: Where? How many? And when?

Students’ work
The students worked first on the context, the link to the water. Many of them were interested in revealing the tide and the possibly salty water. The physical context was generally the first step. One group of students worked on the idea of offering this “brown field” a way back to its origins, that is, to become an island of the Seine once again. The project presented here focused on the role of socially useful art. The project was the first artistic intervention on the site to reveal the docks as a new part of the city. The spatial experiences focused on the possibility of a large sculpture and experimental student housing and more ephemeral artistic activities and community activities.

ENSP Studio
At Master 1 level, three main studios and a large regional analysis form the main annual topics.  The first studio is on urban expansion through the notion of Landscape Urbanism. The studio is held in English with invited guest academics.  One of the studio sites (the city of Rungis at the southern edge of Greater Paris) is used for the diploma work of a guest student from China CHU. 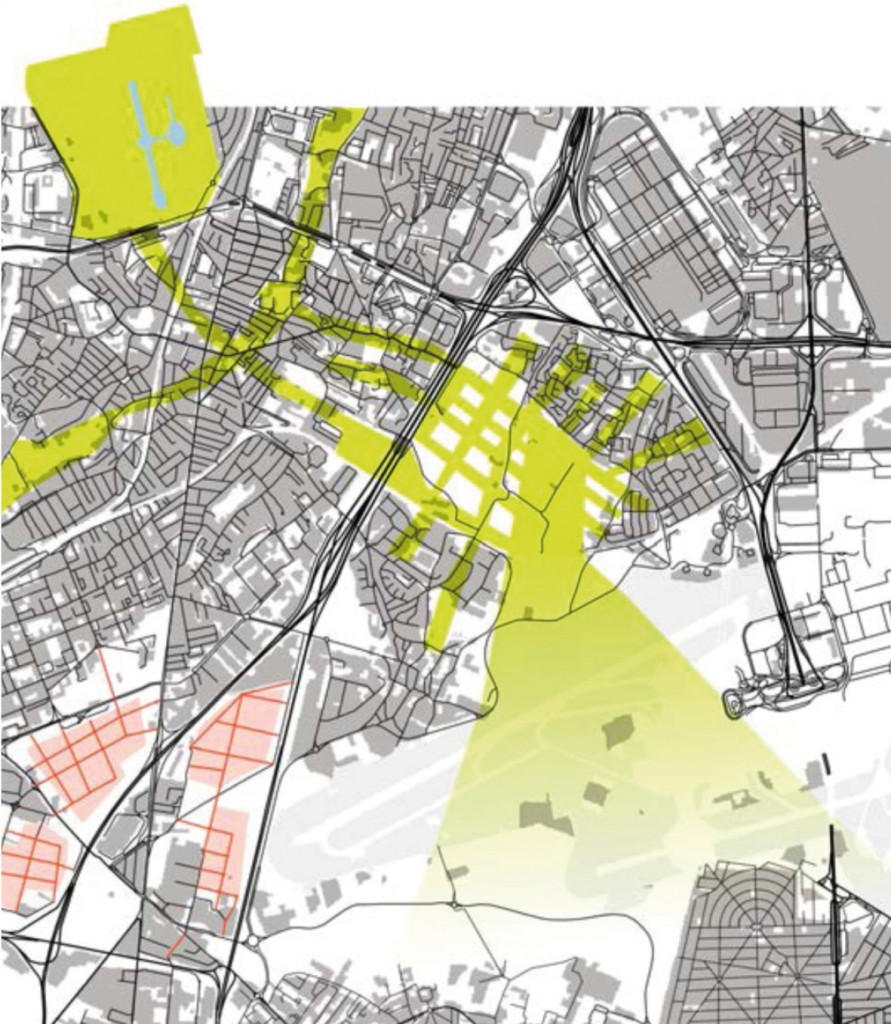 Students’ work
On a 30-ha rural plot of land on the southern edge of Rungish, which is economically disadvantaged, with a plant nursery that belongs to the Parisian city authorities, which is underused due to more ecological ways of greening the city centre, the students chose to develop a new housing area to represent the future of this land. The project proposed by the CHU was to remodel the geophysical relief and rediscover the hydrological links that have been disturbed by contemporary constructions such as the highway, the canalisation of rivers and urban expansion.  The project underlines the topography and its curves as the foundation of the future housing area; in addition it creates a platform for viewing the horizon in the shape of a large terrace. The terrace forms a boundary between two housing zones, a transition between two landscape entities. 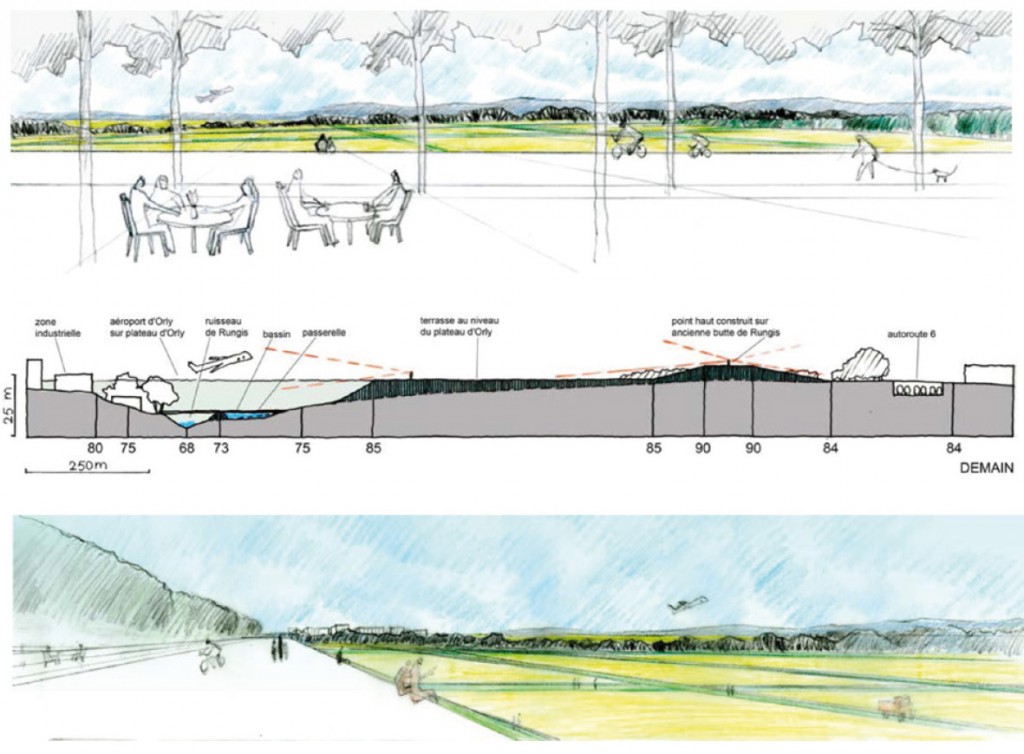 ENSP Studio
At Master 2 level there are two main studios. The studio held by Prof. Gilles Vexlard deals with a very large urban and suburban landscape. The main topic is to redefine geographical logics on a territory and organise landscape sequences for a better understanding of the site as well as to anticipate future developments. 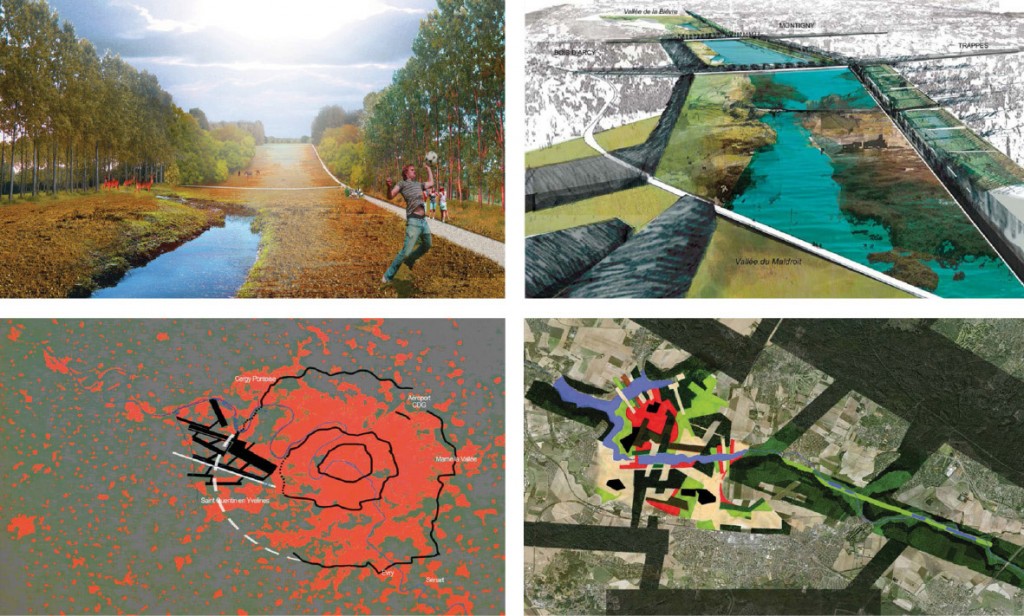 Workshop issue
Within the framework of this workshop on urban creativity, the theme proposed in 2011 was “urban water”. Water plays a definite and crucial role in the design of urban and other landscapes. For the notion of “associated water” to be applicable at a territorial level, it must be an integral part of a project’s geographical situation and future site. The terrain is a research tool, a prerequisite for the development of landscaping approaches that annex “the space under the sky” occupied by forests, wetlands, cultivated lands, meadows, infrastructures, and construction work. Each student developed a topic for the future of this site and its capacity to accept new inhabitants. The students worked out different topics such as:

Students’ work
This concerned water associated with the cultural forms of the landscape, “the parks”, “metropolitan woods/forests/”. A large-scale Parisian forest that links the city centre of Paris to the rural area through the suburban city. This project anticipates climate change by proposing large green corridors for leisure, for ecological and water trails, as well as being a way of bringing fresh air into the city from the west coast.