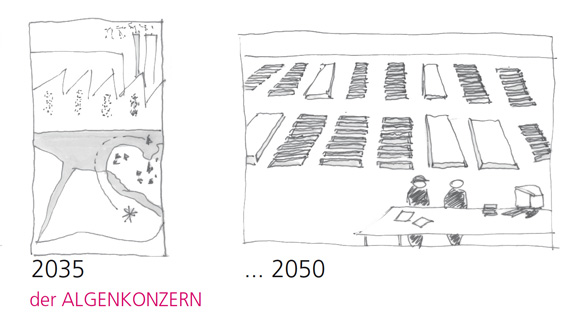 The case-study area, the “Altes Land” (Old Country), is situated in the former marshlands of the River Elbe near Hamburg. Situated in the growing metropolitan region of Hamburg, it is a highly efficient agricultural landscape for fruit production – primarily apples and cherries – influenced by and connected with the water dynamics of the river.

Due to the diverse interdependencies within the metropolitan area of Hamburg, the area can be defined as an agro-urban landscape. Against the background of current developments – urbanisation processes, demographic trends, climate change, changes in the water systems, rising sea-levels and others – the area is under massive pressure to change.

For the first three days, the students investigated the area on site by talking to inhabitants and experts and by recording their findings visually. The results of the analysis formed the starting point for designing future scenarios for the area as a productive agro-urban cultural landscape. A proposal for a methodological development process from now until 2011 was developed and presented in the form of a storyboard with characters, settings, moments of suspense and so on.